Flooding in Berkley - What Can We Do? 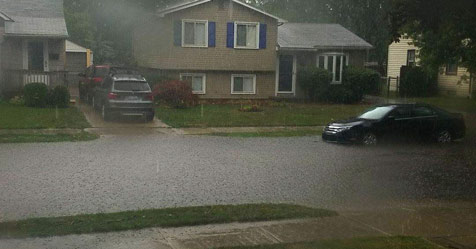 Berkley has flooded once again. A heavy downpour filled our streets and many basements.

We have combined sewer system, meaning storm water and sewage flow through the same pipes. When we have a large amount of rain in a short amount of time, the system is overwhelmed and the water and sewage gets pushed into people’s basements.

At the last Planning Commission meeting, the city’s engineer was in attendance and was asked if there is anything the city could have done to prevent 2014’s flooding. The engineer didn’t really answer, saying it was complicated.

So, if I were on council, what could I do about this?

The question the commissioner asked was a smart one - one that should have been asked a long time ago. Did the city do anything wrong? If so, let’s figure it out and learn from those mistakes. We need to tackle every problem every time assuming we can do a better job.

Maybe we would have found out the city couldn’t have done anything. Is there a regional solution? An example of this would be to separate the storm water and sewage systems. We can’t do that in isolation, and it would be very expensive, but if we don’t even start to ask the question, we can’t know if it is possible.

If we can’t do anything at the city or regional level, what else can we do? Education would go a long way. Installation of a back flow preventer on people’s sewer lines would protect many. Installation isn’t cheap, so they aren’t for everyone, but teaching people on what they can do never hurts. Also, make sure people are aware that homeowner’s insurance usually does not cover drain backups unless there is an add-on to the policy. Then follow up with annual reminders for both current residents and new neighbors - maybe even in the water bill.

What we can’t do is say 2014 was a 100-year storm, so we don’t need to worry about it. Anyone with a basic statistical knowledge knows that even rare events can cluster, so we shouldn’t assume we’re safe for another 100 years. And anyone with a passing knowledge of Berkley history knows this is not a rare event for us.

For those of you whose basements flooded again, I don’t have an answer for you. The hard problems rarely have easy answers. But you can be assured I will be asking lots of questions and try to learn what we can do.