The State is Raiding the City's Piggy Bank 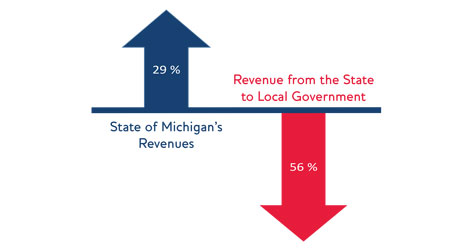 I was able to attend the Save MI City event this morning.

Since 2002, the state has siphoned 5.6 million dollars from Berkley. Spending at the state level has gone up while cities must cut services to keep budgets balanced.

As an example of the disparity, state police funding has increased by 30%, but cities have had to cut more local police positions than are in the entire state force.

The Michigan Municipal League (MML) is drafting legislation and working with state lawmakers to find solutions that would fix these problems without increasing taxes.

What’s the catch? When the economy does poorly, your tax rates go down quickly to match your property values. But when things get better, your taxes will increase very slowly. The proposed changes would allow property taxes to more closely track the economy both in up and down times.

I am continuing to educate myself on this. I’ve only heard the municipal side of the argument, but based on the evidence I’ve seen thus far I think this is a real problem that we need to look at how to fix.

What can you do?