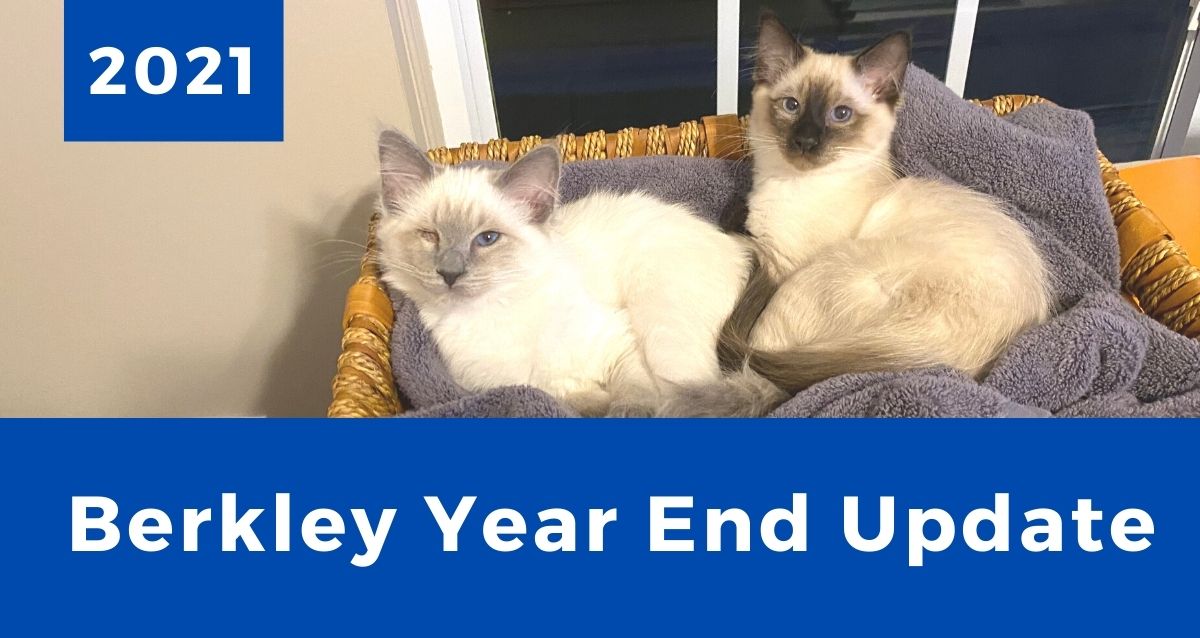 Despite another year of Covid, there have been a number of exciting changes in the city in 2021 and a lot to look forward to in 2022.

First, the most exciting personal news for me this year. Jennifer and I got new kittens in November! Nicolette (seal point / tan, on the left) and Cosette (blue point / gray, on the right). They are Old-Style Siamese. We were sad that our 18 year old Siamese, Miette, died in August, but we're happy to have these two bundles of energy running around the house with us. 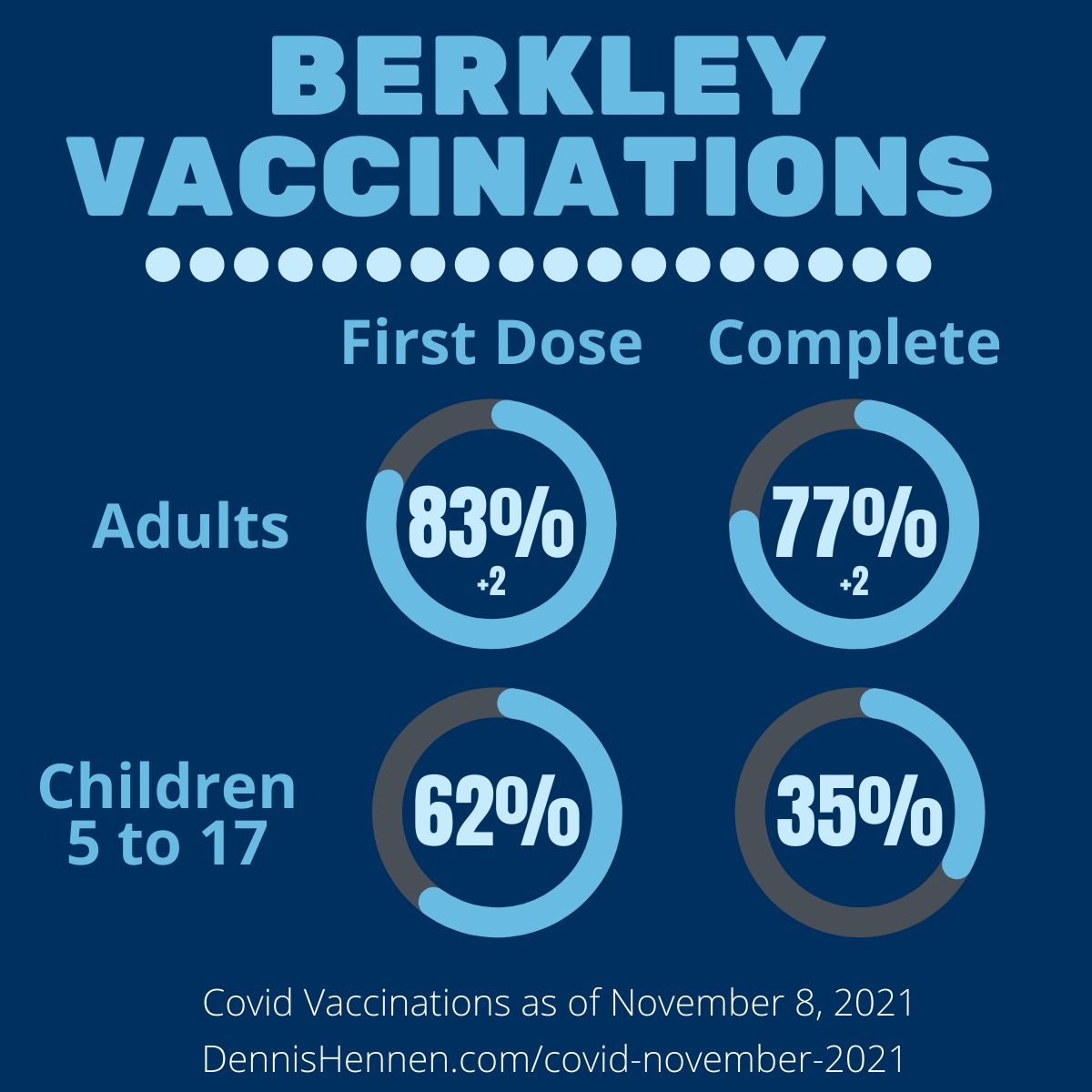 Unfortunately, Covid continues to be the biggest story of the year.

As scientists have learned more about how the virus spreads and how to keep us safe, more things have been able to re-open. This year we again held the Street Art Fest, CruiseFest, Art Bash, and the Holiday Lights Parade, as well as a new event, BOO!KELY Nights. City meetings have gone back to being in person, and more of the city's buildings have reopened.

However, Michigan and the region have been in a sustained plateau for some time now, and with the Omicron variant already the dominant strain in the country, cases and hospitalizations will likely increase significantly soon.

Although over 83% of Berkley Adults have received at least one vaccine dose, full vaccination and a booster shot is what is necessary to protect you and your family from Omicron. The county has resources to help you schedule an appointment for your vaccine or booster.

There have been many significant construction projects in Berkley in 2021.

Sidewalk repairs have continued around the city. Over the next two years, repairs will be completed in the northwest and southeast sections. After that, each section of the city will see repairs on a five year rotation so we can ensure our sidewalks are always in good shape.

Phase 2 of a city wide road patching program is nearing completion. This project used 2018 infrastructure millage dollars to repair failing concrete roads throughout the entire city. Because of bad weather, some areas north of 12 Mile are not complete yet, but they will be finished in the spring.

The next phase of the millage dollars will be used to reconstruct Cornwall and parts of Kenmore Road north of 12 Mile, starting in 2022.

Consumers Energy is also replacing gas lines north of 12 Mile  That work also should be finished in the spring.

All of this work has left a lot of colored flags around the city. I wrote an article explaining what they are and what they mean.

The city also saw completion of updates to the playground at Oxford Park and a new splash pad, as well as new play equipment at Community Park and the Tot Lot. The Berkley Plaza is also near completion.

Despite the challenges of Covid, 2021 has been a busy year for business development in Berkley.

The city saw 22 new businesses open, and several more have been approved and should open soon. We also saw a number of facade grants awarded to help improve the look of our downtown.

I'm excited the former La Salette School building will be saved and converted to apartments and that work has already begun, although I believe the tax abatements they were given is unnecessary.

Work is well underway for the new Aqua-Tots swim school at the location of the former Farina's. It will also contain retail space and room for a restaurant with outdoor seating.

It also looks like El Patio Mexican Restaurant will be opening in the location of the former Patrick J's.

2021 also saw the completion of Berkley's largest mural to date on the side of the former Berkley Theater.

The city just completed planting 214 new trees. Approximately 100 more will be planted in the spring, made possible by two different grants totaling over $17,000.

The city provides street trees free of charge, but the waiting list is long. Watch for signups to reopen in the spring.

Many people have asked if they can pay to have a tree put in. The limiting factor is not so much the cost, but rather the staff time to make sure each proposed tree is suitable for its location and will not cause problems in the future.

The city is committed to increasing the number trees in the city for aesthetics, shade and property values, but also to help with stormwater management (pdf).

Unfortunately, we again had basement flooding in Berkley after heavy rains. While it was not as bad as in years past, it shows there is still work left to be done on this regional problem.

Funding has just become available from the county for stormwater planning. City staff have ideas for solutions that may help, and if we are awarded this grant, it could help us find answers.

I have long been a proponent of backwater valves, devices that virtually eliminate water from backing up into your basement. Because of the state restrictions, it is difficult for the city to pay for these in private homes. However, working with the City Attorney, we've begun to look at using federal dollars to help pay for installation to help reduce the impacts of flooding.

Early in 2022, City Council should make the final determination on awarding Marijuana Licenses.

The city was ready to do this in 2020, but several companies that didn't get top scores sued, holding things up for everybody. They lost most of their claims, and while they have appealed, the courts have allowed Berkley to proceed with awarding licenses.

Once licenses are given, the new businesses must go through the site plan approval process in front of the Planning Commission, just as any other business would.

Other than the new cats, re-election was the highlight of my year. Thank you for your vote of confidence and re-electing me to serve Berkley for a second term!

It has been an honor and a privilege to serve the community for the last four years, and I am humbled that enough of you appreciated the work I have done to help me win re-election.

While no two people will always agree on all the issues, I hope you understand that I will always do my best to represent the people of Berkley to protect their health, welfare, and prosperity.